Gadgets and Gizmos Oh My! 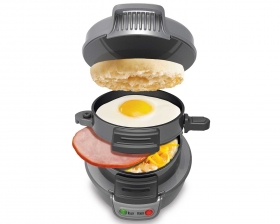 I went grocery shopping on Saturday. Normally I wouldn’t think this was blog fodder, but this particular trip resulted in the most awesome gadget, and I just have to share.

Never go grocery shopping when you’re hungry or in a buying mood. Nobody adds that last part…they assume hunger is the only pitfall during a grocery shopping expedition. I disagree. If you’re in a shopping mood, like I was, it’s darn near impossible to escape the store with your wallet and sanity intact. They design those places like casinos. Aisles extend up and out, and in the middle are tempting kiosks full of stuff you don’t need but somehow end up desperate to buy. Or is that just me?

Time doesn’t exist in a grocery store. My eyes glazed over as I traversed aisle after aisle. I had a list when I arrived but it disappeared the minute I entered. Somewhere the taunting aroma of cinnamon rolls permeated the air. Everywhere signs proclaimed bargains and sales the likes of which had never been seen before.

And that’s when I saw it. (insert a choir singing here)

It was sitting on a special cardboard stand in the center of an aisle, which made it impossible to get a cart through without moving said stand. As I shifted it over, I realized what it held.

Don’t laugh! This thing is awesome. At first I smiled, then giggled, then gleefully thrust it into my shopping cart. Oh yes, it would be mine! (Click on the image or the link if you want to find out more about it. No, they aren’t paying me for this endorsement, though I wouldn’t turn down an offer.)

Have I mentioned I’m the world’s best impulse shopper? If I’m in a shopping mood, I don’t dare go to a convenience store, Bed, Bath, and Beyond, or The Container Store. Everything in the checkout aisles tempts me, and I’ll end up with an armload of gadgets and whizzes and plastic doolies. The shopping daze lifts once I”m home and unwrap it all. Do I really need a plastic gizmo to cook an egg in the microwave? No, not really. So why did I buy it? That, dear friends, is why marketing people get paid. Only they can tell you exactly what spell they cast to make me pick up that piece of junk and go home with it. (It broke the second I tried to wash it, by the way, and didn’t cook the egg worth a darn. Not to mention the egg exploded all over the microwave. But I digress.)

But that junk is nothing compared to the awesomeness of the Breakfast Sandwich Maker. I love breakfast sandwiches. I make them quite often, utilizing a baby skillet with a picture of an egg on the handle, which is so small that it’s quite impossible to actually flip the egg, but the shape is right so I persist. I’m constantly trying to recreate the Panera egg and cheese sandwich. Though I’m never quite successful, I can’t help but try. Over and over and over. It’s probably a good thing we don’t live within walking distance of Panera. I might never leave.

I tried my new appliance out immediately when I got home, after admiring the cuteness of it. This thing is not large at all, and squats ever so nicely on the counter. It’s a complicated piece of machinery, but once you learn what goes where…oh my goodness. It’s fast, easy, and it makes a perfect egg sandwich with very little effort required. The egg cooks right on the muffin! The muffin ends up toasted perfectly, and you don’t have to stand there while it cooks. You can walk away for four minutes, and come back to egg-sandwichy goodness. It only does one thing, but it does it extremely well.

What’s not to love?

Yes, it was a ridiculous purchase. I still giggle over how susceptible I am to impulse buys in general. But I’m so very happy with this one that I’ve forgiven myself.

How about you? Have you ever bought a gadget or gizmo that you felt silly buying but which  you fell in love with?