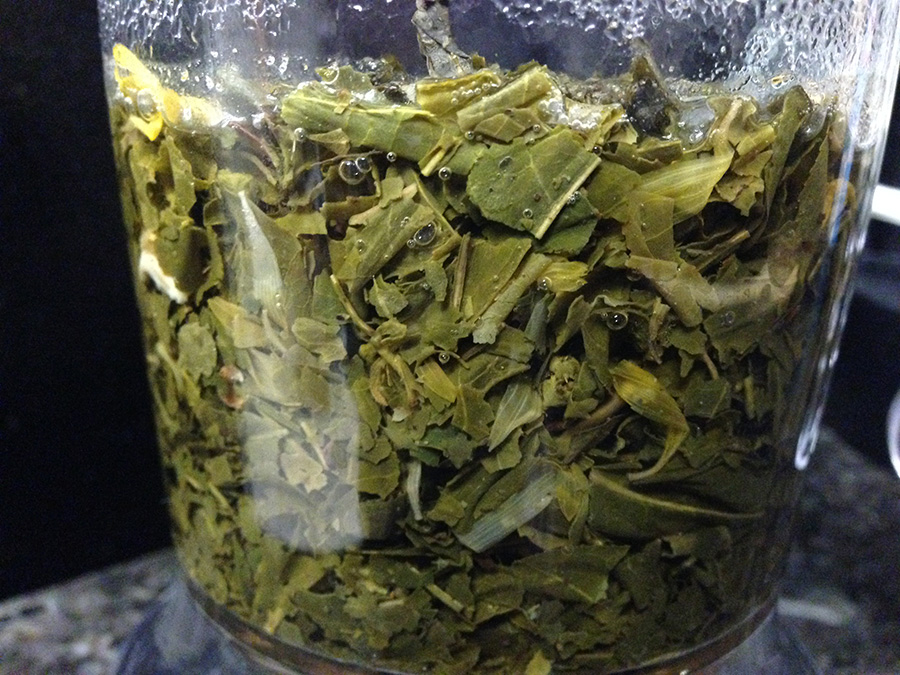 I’ve discovered that the gadgets involved in the making of tea are quite fun. I bought an electric tea kettle that automatically heats the water to the correct temperature depending on whether you are drinking white, green, or black tea. I figured that would take the guesswork out boiling water for me. Who knew heating up water could be so complicated! I love this thing. It’s cute, and makes me feel like I know what I’m doing. Which I don’t.

Today’s experiment involved loose leaf tea since I had trouble getting anything with taste out of the tea bags. I selected the Citron Green sample packet from Adagio Teas, which claimed I would experience the “delicate flavors of lemon and lime.” I’m a huge fan of lemon in ice water, so I thought this might be right up my alley. Plus this, my friends, is an Adagio favorite. So they claim.

Since I’ve been having such a hard time ending up with a cup of anything that tastes like anything at all, I decided that one teaspoon of these leaves was simply not enough. I dumped the whole packet in my little steepy cup. More has got to be better, right? Water, boiled just so. Pour over tea. Wait.

The aroma that ascended from the steeping wasn’t very pleasant. It smelled like bitter weeds. But hey, all the awesome smelling stuff tasted like nothing at all so I figured this might not be bad. Maybe the smell has to be bad for the tea to taste good.

I set a timer for this one, so at precisely three minutes (it said two to three) I poured into my trusty mug.

Wrinkled my nose. It wasn’t smelling any better. The water was basically clear, but the scent was not promising.

Stared at the cup. Surely I didn’t taste that right.

Sipped another long swig. Just to make sure I had the taste firmly in mind.

I nearly spit it out all over the kitchen. Instead of a delicate lemon and lime flavor, I was treated to the foulest tasting filth I’ve ever experienced. I’m pretty sure the worst medicine ever tastes better than what I managed to produce. On the plus side, I did finally create a cup of something with flavor. On the minus side, that flavor was beyond disgusting. When I’d recovered enough to analyze it, I realized it tasted like bitter orange rinds. And, indeed, on the list of ingredients that’s exactly what was in there. Why anyone would want that taste in anything is beyond me. Chewing on orange rind is not my idea of a pleasant snack. No, I didn’t try to add sugar or anything else to this. Just wasn’t worth it. There was no saving it.

This is popular? Really?

It’s not lost on me that perhaps I had too many leaves in the water. But I’m pretty sure that taste of bitter orange rind would have slapped me in the face no matter how few leaves floated around in there.

I’m not so sure my tea road is leading anywhere pleasant at this point. I can’t decide if I just don’t like green tea, or if perhaps this particular sampler package has too many added ingredients, or what.

So, put this on the “no, not in a million years not if I’m dying of thirst in the desert during a heat wave” list.