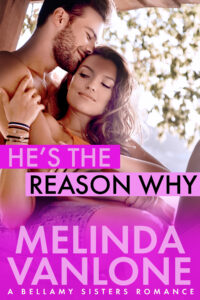 HE’S THE REASON WHY

She thought work was the answer, but the lesson he learned was love.

Piper Bellamy has been a hot name in the music scene since she was a child, but it’s not enough. She’s determined to make her first step into acting—an animated musical movie—an even bigger success. Even if she has to knock her smirky new leading man Blake Ryan over his too-handsome head and drag him there by his ankles.

Blake Ryan is an Oscar winner and a certified Hollywood heartthrob, but his dreams don’t end with success in front of the camera. A major studio is finally willing to take a chance on his directorial debut. The only catch? First he has to play the lead in their animated musical movie, Scorched.

As Piper and Blake spend more time together their dislike-at-first-sight turns into another kind of tension, but not everyone is thrilled to see their relationship develop. Will a vicious ex’s scheme separate the new lovers forever? Or can Blake convince Piper their love is destined for more than the cutting room floor?