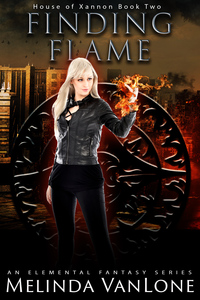 All that has been is written on the Wind. But will the past save the future, or destroy it?

Macari, First Daughter of the Benata Daemon Court, has lived a sequestered life. She spends most of her time suppressing emotions and traveling through a storm of air magic that chronicles everything that happens in both the human and daemon world.

When Macari is ordered to spy on Tarian Xannon, she will have to cross the boundary between daemons and humans, something that has never done before. But if she doesn’t try, she’ll be banished from her home. Forever.

Finding Flame is the second book in the House of Xannon elemental magic series. If you like urban fantasy featuring strong women using magic, skill, and guts to save the world one catastrophe at a time, you’ll love the House of Xannon.