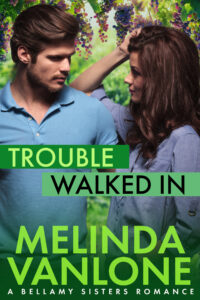 She opened an inn…he followed his heart.

Lizzie Bellamy ran away from her past to live a quiet life in a small town in Upstate New York, but the past catches up with her when her little sister, Della, turns up on her doorstep. Where Lizzie’s pop-star sister goes, Jackson Renic is sure to follow. Renic, the executive who broke up her family, the friend who betrayed her, and the man she had no right to love.

Jackson Renic hates to see one of his artists off the rails, especially Della Bellamy. She’s his first client and the sister of the woman he’s never been able to forget. Following her to Upstate New York gives him a chance to see Lizzie and finally put things right between them.

Lizzie and Renic both want Della’s life back on track, but a world of old hurt and years of misunderstandings keep tripping them up. Will Rennick be able to convince Lizzie that they have a future when she keeps clinging to the past?

This is a frenemies-to-lovers, small town, second-chance romance. High on the heat and even higher on the swoon.