What I’m Reading – The Legacy Human by Susan Kaye Quinn 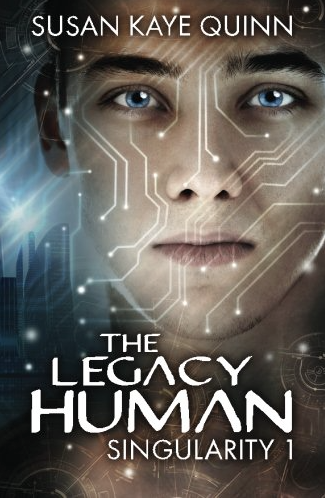 I’m a big fan of the MindJack Trilogy, so picking this book up was a no-brainer. Though I have to say…the reason I’d give it 4 stars and not 5 is because it’s in first person present and I just HATE that. It pulls me out of the story and makes my brain hurt. I know it’s all the rage in YA but I just can’t stand it. It’s merely a personal bias, not a fault of the writing. But I figure I should mention it in case someone else feels the same way I do. And if you do, read this one anyway.

After struggling with the first chapter, I was so fascinated by the story and world that I forgave the present tense and pushed on through, because I simply HAD to know what happened. And I gotta say…the ending? darn you! When the heck is the next book coming out??? How could you leave me like that?

I found this whole world fascinating. It’s dystopian but not as you’d normally picture it. Sure, humans are downtrodden and under the boot of the, well, machines for want of a better word. The Ascended ones, but I still see them as machines. But where Hunger Games has kids killing each other, this has them competing in the Olympics, except that instead of sports or athletics, the Olympics now feature music, writing, poetry, and art. Gotta admit, I LOVE that idea. How cool is that? Sure they’re competing for the chance to Ascend, but underneath that is the idea that creativity and Art is what was lost when humans moved forward in their evolution. And that it’s the one thing they wish they could get back. And our boy here might just be the key.

Running through all this is a current/theme of what, exactly, is a soul…and was it also lost when humans moved forward. Religion, faith, that spark that makes you “you”…all of it is at the core of this story. Those looking for a fun way to make their teen think will really like this.

I also enjoyed that it was a male POV protagonist. And that’s an artist. I just want to hug him and celebrate that…Art is just not valued as much as it should be these days and it’s nice to see it celebrated here.

So if you like sci fi/futuristic/dystopian/figuring out who you are and coming of age/adventure…check this one out. No real romance in it to make the boys feel icky, no real blood to make the parents feel icky, no swearing that I noticed. And possibly a great conversation starter on the subject of faith and creativity and finding your place.
And if you don’t like first person present tense…grit your teeth and bear it 😉