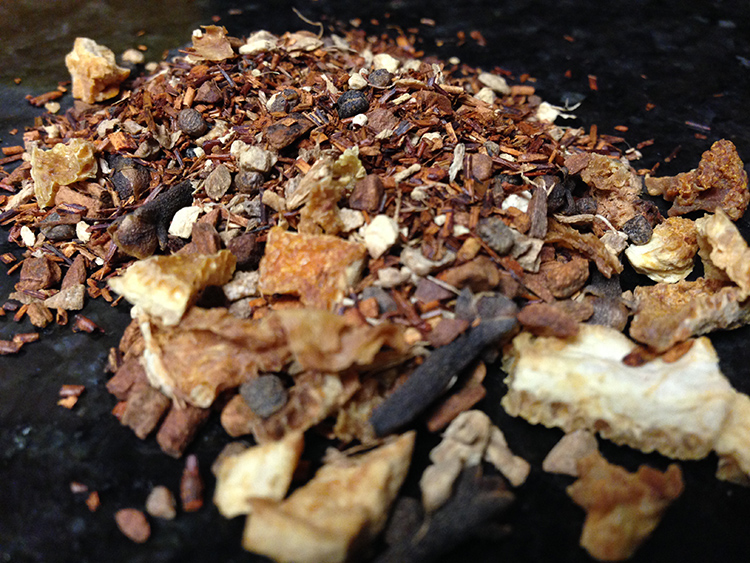 I took the first step toward tea enlightenment last week.  I was settling down for a fun night of raiding in World of Warcraft – yes, I unwind by killing virtual monsters, don’t judge – I thought it would be nice to have a little taste of something to cheer me on my way to victory. I settled on Adagio Teas Rooibos Vanilla Chai. At first, the scent was…odd. Clove, perhaps? Not a huge fan of that first smell. Sort of made my nostrils flare like a snorting bull. But right after, vanilla and cinnamon hit my nose and made me smile so I thought what the heck. I scooped out a spoonful and stopped to stare. So this is tea, is it? See picture above—I’m pretty sure it was all scraped right off a forest floor and dumped into a bag. Someone probably laughed while they did it, because they knew someone like me would be thinking it was something edible, instead of what it really is…refuse. Still, I’m determined to give it a try, so I dumped the sticks and pieces into the impulse buy steeper thingie. I used the microwave to boil the water…I know. Tea fans everywhere just fainted.

I waited the 5 minutes the package indicated, and then took my steaming cup back to  office. Holding it in my hands was extremely comforting. It smelled like a cup of hot cider. I actually drooled, smelling that apple cinnamon. Mmmmmm. Who knew sticks could smell so good?

Now for the million dollar question…how does it taste?

First sip, second sip…I got nothing but a nice scent and the taste of hot water.

At least it’s not bitter?

Clearly my tea-making skills need some work. Either that, or a whole lot of people are pretending to taste something that isn’t there. It’s probably me. I’ll give this one another try before I nix it completely, but have to admit my first step was a bit of a let-down. But I’m not giving up yet!