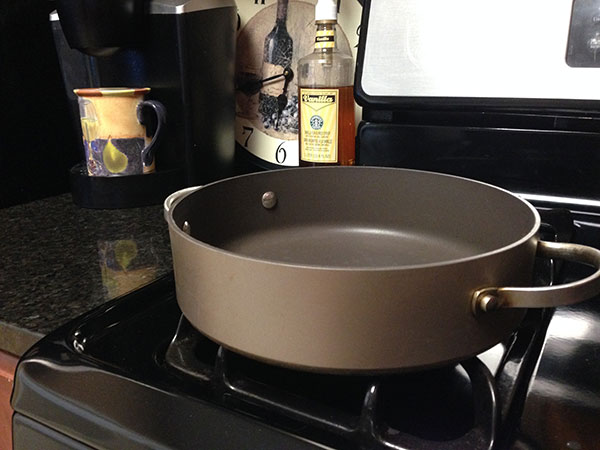 In the realm of things-that-only-happen-to-me, I present: The Great Chicken Caper

Lately I’ve been trying to cook healthy lunches for hubby to take to work. The meal I’d planned for Friday was a chicken flatbread type of thing. Tasty, with wheat crust. All I had to do was cook the chicken and add some other easy toppings. I should point out that this isn’t the first time I’ve cooked chicken. I love chicken. We have it quite often, and I’ve learned a way to make it come out super juicy and delicious on the stove top, using a pan, a little butter and water, and a lid. So that’s what I set out to do.

I was in the middle of cooking said chicken when the hubby came home, and we started talking. I continued to cook, half looking at him. When I had the chicken browned on both sides, I grabbed a lid and put it on there, then turned my back on it. It should have been fine. It’s supposed to cook for 10 minutes like that. I’ve done it many times before.

What I hadn’t done before was use a lid that didn’t fit the pan.

When I turned back to check on the chicken, the lid had fogged over, so I tried to lift it off to see underneath.

As in, not one fraction of a hint of a move. I tried again. Nothing. I peered at the lid, and realized that it had sunk down into the pan a good quarter of an inch, where it used the steam and heat to seal itself so completely that nothing was escaping.

I won’t list the swear words. You can imagine them, I’m sure.

I tried everything. I turned off the heat. I yanked, pulled, tugged, cursed, begged, pleaded. I banged, cajoled, ran it under cold water so I could get my hands on it better, which only seemed to make it worse. I know, cold causes shrinkage. But you try prying a super hot lid off a scalding pan! Finally I set it aside, and gave up. Disgruntled, I left the pan with the now lost chicken on the counter. I’d deal with it in the morning, I figured.

The next day, I ignored it.

And the day after that.

The day after that, hubby mentioned that perhaps I should deal with the pan, one way or another. But this is one of my favorite pans, and throwing it out made me kinda ill. This wasn’t a cheap pan. It’s Avalon. And the lid obviously went to another pan that would need it, someday. I tried to think of different options. Throw the whole thing out? Painful, but a quick ending to the problem. Take a hammer to the lid and try to break it, thereby at least saving the pan? Risky, what with shards of broken glass flying around and all, but possibly better than tossing the whole thing. I love that pan. I wanted to save it. I wanted to save the lid too. Maybe if I heated the whole mess back up, the lid would unseal? Not sure. I missed that part of science class.

Another day went by.

That’s when a certain aroma started to drift from the pan. Strange, since the lid was sealed so tight that you couldn’t stick a sliver of a needle between it and the side of the pan, but the smell managed to make its way out just fine.

Have you ever smelled rotting chicken?

At this point I was too afraid to try to release the seal, because if I could catch a whiff of odor with the lid on, imagine what it’d smell like off! But…it’s my favorite pan.

Finally, I got out the hammer. I put a towel over the lid to catch the broken glass.

It didn’t break. But it felt like something shifted.

Stench wafted up from the pan. I checked under the towel to see if I’d cracked the lid. Nope. The lid on one side had gone even further into the pan, with the opposite side now sticking up over the edge. Excited, I lifted the lid off. Not even a scratch on it. Talk about tough material! I’m guessing it’s probably not glass at all, but some sort of alien material from Septune Minor.

Of course, the excitement at having saved both pan and lid quickly gave way to consternation. The smell. I haven’t encountered a stench like this since…well since the time I left chicken in a freezer and the freezer died, basking the chicken in Texas garage heat for days.

You know, once that smell is in your house…I’m not sure a firehose of bleach can get it out. I’m still trying. Windows wide open, Febreeze sprayed liberally several times a day, baking soda in the garbage disposal. I washed the pan six times so far.

The moral of the story is, don’t put a smaller lid on a pan with steaming things and then turn your back on it.