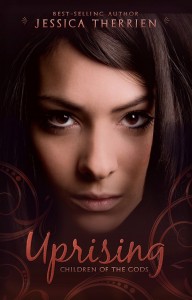 Just wanted to give you a heads up! Jessica Therrien follows up her bestselling novel OPPRESSION with UPRISING, the second book in the Children of the Gods series. OPPRESSION, translated and sold around the world, was one of the best selling YA novels of 2012.

UPRISING continues the story of Elyse, William and the Descendants. Elyse has been in hiding for most of her life. Only now she’s hiding with William, and she knows who she’s hiding from. The Council wants a child Elyse and William have yet to conceive, a child who will be the next oracle, and who will provide the final piece to a plan Christoph has been organizing for years.

Charged with leading the rebellion against Christoph and his Council, Elyse feels well out of her depth. But she has good friends and strong allies who are willing to fight with her to the end, regardless of how far they have to go, and how many lives will be lost in the process.

They have one goal: to live freely and openly with the rest of humanity, out from under The Council’s oppressive rule. The stakes could not be higher for Elyse and the Descendants longing for freedom. They’ll have to learn to fight if they want to stand up against The Council, and to find allies in a world ruled by their enemies. The hardest part of waging a war is knowing who to trust. Elyse knows their uprising will change the world. She doesn’t realize it will change her, too.