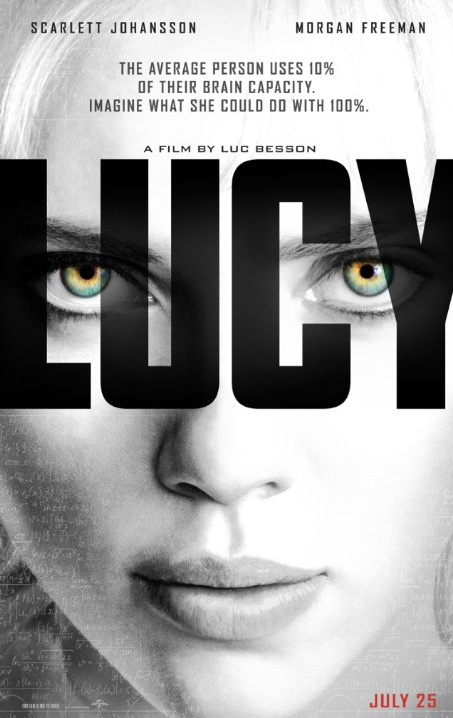 Before I get to the review I have to say something about the Promise of the Premise. When a storyteller writes up a synopsis or log line, they’re making a promise to us. “This is what the story will be about. This is why you should watch it.” It’s a hook, meant to real us fishes  in to the theater.

So here’s the premise for Lucy, as posted on IMDB: A woman, accidentally caught in a dark deal, turns the tables on her captors and transforms into a merciless warrior evolved beyond human logic.

Love that. An everyday woman in a horrible situation evolves into a warrior who kicks ass? Awesome. I’m on the hook. The log line nailed it for me: The average person uses 10% of their brain capacity. Imagine what she can do with 100%.

Where’s my ticket! I wanna know; what CAN she do?

Before I delve into that, if you haven’t seen it, and you’re going to…if you don’t like spoilers…now would be a good time to step away. I’ll tell you I liked about 60% of the movie…and I’m about to tell you why. And to do that, I gotta talk about the end. So, you know, if that bugs you, head on over to Facebook or something. Come back after you’ve seen the movie. I’ll wait. Go ahead…

Last chance! Look away if you don’t wanna know!

OK, if you’re still here, I assume you don’t mind a bit of spoiling. Here we go then.

I loved the set up of this movie. Scarlett did a great job acting terrified. I seriously was biting my nails for her, certain she was about to die. Then they made the situation even worse. They kept flitting away to show me a bit of Morgan Freeman in a lecture hall, lecturing (because of course what else do you do in a lecture hall) but I found those sections irritating and ultimately boring as hell. And I love Morgan Freeman. It’s not his fault. I know why he was there, and I don’t agree with it. But I digress.

The basics of the story is Lucy ends up stuck in the middle of very bad people doing very bad drug things and ingests a designer drug that sets her on the path to using 100% of her brain. She passes out as just another average college student caught in a nightmare and wakes up Bad Ass Lucy. So far, so good.

When she hits about 30% of her brain capacity, she loses all ability to feel. No pain, no emotions, no connection to other people. And that’s where hubby lost interest in the movie. And I have to be honest, the new improved Cold Lucy didn’t appeal much to me either but I loved how her abilities grew. Like with the flick of a hand she could send someone flying through the air, steal their guns, knock them unconscious. That’s pretty cool, gotta be honest.

The whole story presumably is a race against time. Bad Guy wants his drugs back. Lucy wants them for herself. But she doesn’t really explain why. And in the end she’s just like the bad guy. Feeling nothing, wanting nothing but that end goal of getting the drugs. When she gets them, she uses them to get to 100% of her brain. And what does she do then?

I fully expected it. I expected that she’d turn into pure light or something, just because the whole story felt a bit cliche and I figured becoming pure energy would fit. The movie seemed to be saying that if we evolved to use more of our brain we’d lose that which makes us human. We would turn into complete self centered assholes who move so fast as to be invisible and, in theory, cease to exist at all because if you can’t be seen, do you truly exist?

Perhaps it’s some sort of play on religion at the end. Perhaps they’re saying we’d turn into a type of god. I don’t know. I stopped caring back at 60%. Because if I can’t relate to Lucy on a human level, then I don’t care about what happens to her, nor do I care about the story message (if it ever really had one). Lucy obviously didn’t care about what happened to those around her. Not the bad guy. Not the good guys. Not even Morgan Freeman.

She could have taken out the bad guy any number of times, with a thought. But didn’t. All she cared about was getting that drug.

At the beginning of the movie, I’m waiting to see what she’ll do with 100% of her brain. By the end, I realized that not only did they never really answer the question, but what I’m left to assume is that using 100% of your brain makes you…nothing.

I get the feeling the writer had NO IDEA what would happen if you did get to use 100% of your brain. And he gave up trying to answer it. That makes me sad, because exploring that was what grabbed my interest in the first place. I wanted to root for her, to watch her triumph over evil. In the end, I didn’t get to do any of that.

The sections with Morgan Freeman? Should have been deleted. They were one giant info dump, nothing more. Using Morgan Freeman to deliver backstory information so that you didn’t have to write it into the story? Lazy, just plain lazy. And since the movie is only 1 hour 28 minutes, I think there was plenty of time to spin a good story. Just sayin’

I guess I’m just irritated that they lured me in with the promise of a girl kicking ass and then delivered…nothing.

My take: Loved the beginning, the middle was interesting, the end sucked.

Hubby’s take: Up to 30% was interesting, by 60% it left him cold, by the end he was checking email and making fantasy trades.

Jasper’s take: He didn’t go, but he’d hate it. Not enough movement or action for him.