Movie Review: Guardians of the Galaxy 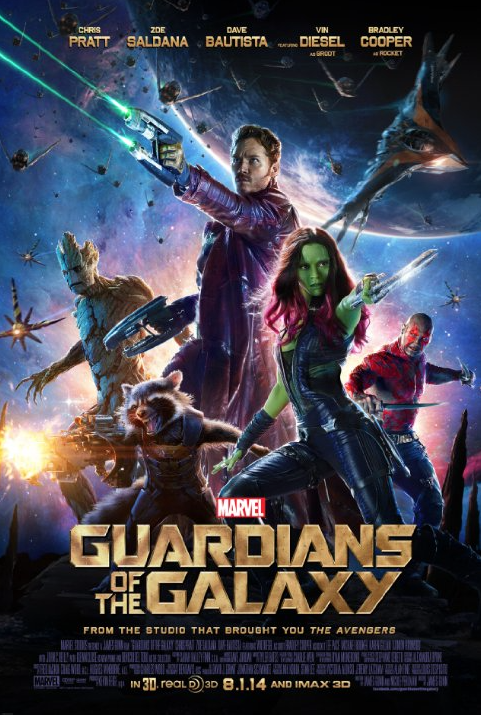 First, I should point out that I’ve never read the comics that this movie is based on. I went in knowing absolutely nothing about the characters, their world, or the plots in general. I’m a complete newb, and my opinion is based on the preview and the movie itself. Based on the preview alone, I knew I was either going to love this movie, or hate it. It could be awesome campy goodness, or it could be completely stupid and a waste of two hours.

So which was it?

For me, it was everything I wanted it to be, with one minor exception. It was over the top spacey fun. It had heroes and villains and there was no mistaking the two. I loved the love affair with the 80s prominently displayed at every turn. I have a friend who would absolutely love the Walkman practically being a character and definitely being a symbol that travels with wanton abandon throughout the movie.

I don’t understand why they paid Vin Diesel to be Groot (if you don’t know, Groot is a walking, sorta talking, tree). He only says three words and anybody could have said them. It’s not like it even sounds like him.  And you never see his face. Same thing with Rocket the Raccoon. If you go expecting to swoon over Bradley Cooper or marvel at Vin action, you’ll be extremely disappointed. That said, I thought all the acting was great and the two who could have ended up ruining the movie, Rocket and Groot, end up being so very cool I forgot I was watching a raccoon and a tree.

The whole thing is a giddy romp through tropes, a playfully wicked pun, and a heroic carefree leap into the things we love to cheer for. The average guy saving humanity in a slightly cheesy but nevertheless exciting way. I loved the effects, the battle scenes, the gadgets. Oh, the gadgets! I want that helmet! I want to be Gamora – she can seriously kick ass!

It’s a Star Wars, Galaxy Quest, Independence Day, Footloose ice cream treat with a Raccoon Han Solo and talking tree sidekick who can kick butt sauce, and a Hulk/Spock hybrid for sprinkles. Yes I know that sentence is ridiculous. But it fits this movie.

My Take: If you love sci fi that can laugh at itself and at the same time deliver a pretty solid story full of the wonder of your youth, give this a shot.

Hubby’s Take: A bit disappointed. He expected the dialogue to deliver more one liners or memorable quotes, and more laugh out loud funny moments, and to him it didn’t deliver. I have to agree with him on that. It’s the minor exception to my instant adoration…I also expected some lines that would endure the test of time. You know, those pearls that people quote to each other at work or while they’re out with friends. I didn’t catch a lot of those, and neither did the hubby. Puns, yes. Timeless lines, no.

Jasper’s Take: He loved the action, the constant movement, and the effects. Most of all, he loved Groot. He saw that as one giant kitty toy. Two paws up.