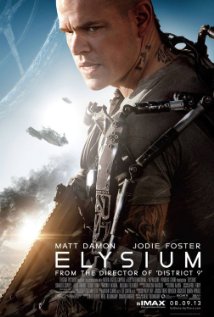 I saw this at the late showing last Saturday, so I was only half awake. It certainly lent a surreal quality to the story which I highly recommend. When it was over, my immediate thought was “I enjoyed that.” I loved the premise…the haves built their own private space station, a utopia, for which the poor need not apply. The poor stay down on dirty, rotten, abused Earth and stare longingly up at the pretty Elysium station. Up there, the air is clear. Up there, nobody gets sick or dies because they have med bays which heal your every ailment. Up there, heaven awaits. They can see it. They can almost taste it. They can try to sneak across the border into it. But they can never stay.

I never quite figured out exactly what the rich up there did to remain rich other than the one guy who owns the factory where they make all the robots. Sure, I can see how he survives but what about the others? However, I pushed that thought aside and followed the action. And yes, there’s lots of action, fights, explosions, very cool guns and futuristic toys, and Matt Damon. How can you go wrong, right?

The hubby, however, thought they did go wrong. Very, very wrong. As we left, he said there was one giant plot hole he couldn’t get past. After thinking about it over night and for the next several days, I realized what the issue was. The problem is, the world and society they tried to build for this story was never quite explained. The world building was incomplete. The viewer is left to fill in some huge blank spots, and also to take many others for granted. I even had to admit, the one stumbling block for him was one I noticed myself but decided at first not to care about.

Since it doesn’t affect the outcome or plot, I’ll tell you. Near the beginning, we are given the information that Elysium has those med bays and the poor people on Earth do not. They have regular hospitals. And apparently in this dystopian future, our hospitals and technology have gone backward on Earth even as it’s gone forward on Elysium. On Earth, they build the robots that are used for all kinds of tasks, including security, on Elysium.

On Earth, they build the med bays that are used on Elysium. I have to assume that’s true, because they never show how or where the med bays are actually built. But since everything else is built on Earth, I assume those are too. So think about that for a minute. The majority of the population lives on Earth. They are poor. They are sick (some of them). They are desperate.

Desperate people can do amazing things when they work together.

Desperate people who work at factories would, in time, figure out how to overthrow said factory or at the very least, replicate a robot or two (or med bay) in their own homes or secret hideouts.

I didn’t get why that many people would remain so downtrodden when they clearly had the ability to not be. They had technology of their own, running water, electricity…and they had the sheer number of warm bodies on their side. They also had the rich people’s disgust and unwillingness to ever visit them on shoddy Earth.

To me, the poor people had everything. And chose not to use it.

I don’t get that.

Hubby didn’t get the attitude of rich people who would have something as fantastic as a med bay to cure every ailment, and then not let them have it on Earth to keep the poor workers healed up. Why would you want sick workers, when you could have able-bodied well ones? He couldn’t wrap his mind around that concept.

After awhile I had to admit I said the same thing, during the movie. Why not just let them have the healing?

They never explained a good why behind the what of this movie. And that makes the whole story fall apart.

Technically this story hit every plot point, every single beat on the Save The Cat beat sheet for screenplays. Yet it felt…lifeless. I didn’t really much care if the protagonist lived or died, which made the final scenes more than a little anti-climactic. I also didn’t see any real change happen. The change he brings about could easily be undone the next day.

I guess, in the end, the world itself was simply too large for this story. Too much needed to be accepted without explanation. They cared more about the plot points than they did the why behind the plot points. They also cared more about hitting the viewer over the head with their social commentary (and it’s so very, very obvious the lesson they wanted to lecture us with) that they didn’t spin a good story. And I don’t appreciate being lectured when I’m paying a lot of money to be entertained. What can I say, I want it all. I want them to wrap up their lesson and lecture inside a fantastic story with great acting and amazing dialogue, world building and characters, and to trust that I the viewer will understand the message without them serving it to me accompanied by a baseball bat upside the head.

All that said, if you go in to this movie expecting an action/adventure with the awesome Matt Damon and some pretty cool other actors to support him, then you’ll have a good time. Just don’t think about it too hard.