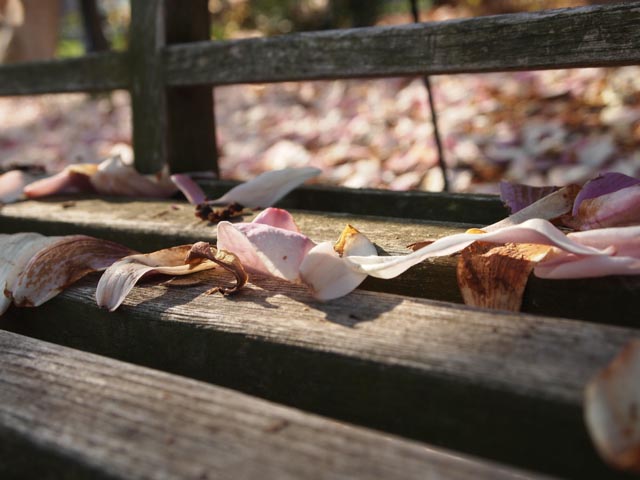 Yesterday, I went for a caffeine fix in the afternoon and passed by the Town Square along the way. On one bench I noticed a man stretched out, presumably sleeping. I remember thinking there’s no way I could feel comfortable enough outside, in a group of strangers, to fall asleep on a bench like that.

I went on my merry little way. When I came back with caffeine in hand, he was still there, in the same position. Kids screamed, planes flew, trucks rumbled. He didn’t budge.

This morning, I went for a Wake Me Up beverage and as I passed the same spot I noticed a man. Asleep. Same bench. Same color hair. Same clothes. My immediate thought? “Is he dead?”

My mind raced the entire walk to Caffeine Heaven. Had he died yesterday and nobody noticed? Or had he died in the night and now this morning there simply hadn’t been enough people for someone to figure out that he wasn’t breathing. I pondered whether I should call the police, or if it would be the kind thing to do to tap him on the shoulder and ask if he was alright. I then immediately thought of all the negative outcomes to that scenario:

1. He leaps up with fists flying and beats me in a fit of frightened outrage.

2. He pulls out a gun and shoots me for disturbing his morning nap.

3. He rolls over and bites me, transmitting some deadly Zombie disease.

4. He falls off the bench, obviously dead, eyes staring right at me accusingly, as if to ask “why didn’t you notice yesterday?”

5. The police happen by and I get arrested for murder, because if you find someone standing over a dead body they’re usually the one who did it, right?

None of these scenarios seemed like a good path for me, so I chose instead to pass closely by the bench with coffee in hand. Just out for a morning stroll. Nothing to see here. I’d have whistled if I knew how to do that. Anyway I studied his prone form for signs of life: chest rising, fingers twitching, a slight shift of weight. Anything.

Nothing. But then I wasn’t that close. I’d have to get much closer to know for sure. And I didn’t think that was a good idea, because of the aforementioned scenarios.

When I went out for lunch, I set out for his bench first, determined to figure out if this poor man had died and nobody noticed. How sad would that be?

The bench was empty.