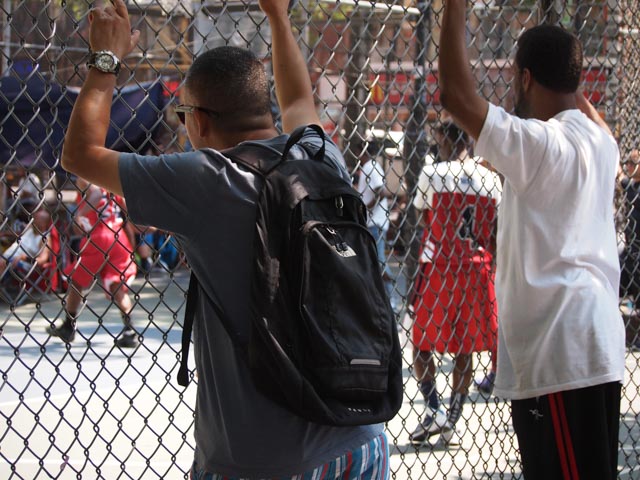 While I was taking a photo tour of New York City, my guide and I walked by a large crowd gathered around what looked like a parking lot. As it turned out, it was a concrete pad with basketball hoops. I paused, because so many people were watching I wondered why. My guide told me it was a neighborhood league, one of the biggest. Kids (this group obviously late teens) from all over tried to play on this court, because NBA scouts sometimes came to watch. If they were good enough, they just might catch a scout’s attention and who knows, might make it to the NBA. That’s the dream anyway, and it’s so real you could taste it on the air. Not just from the players, but even from the people watching and cheering them on.  So many hopes ride on the movement of one bouncing ball.

The guys pinned to the fence on all sides looked on with expressions somewhere between excitement, hope, and despair. Perhaps they’d once played on the court, and been passed over. Maybe nobody of note ever saw them play. Maybe they got injured and had to quit. Or maybe they simply had to go work a day job and couldn’t participate.

Whatever the reason, you could tell they still longed to be there, on that court, working toward a dream that just won’t die.

I don’t know if playing on that court is the only way to get to the NBA. Probably not. There’s always other courts, college, whatever. There’s steps to take. Sacrifices to make. But in the end, just how many people play in the NBA? I’m thinking not very many for the sheer numbers of those who want to.

It’s kind of like writing, I think. I have dreams, of course. I didn’t quit my day job on a whim. It was a deliberate decision, a first step toward the dream of being a published author. It sure wasn’t the only step. Heck I’m still working on this dream, because I realized once I published the first book that my dream needed a re-definition. Yes, I wanted to be published. And here I am, published. So, now what? Do I move on and take up sky diving or something? Pursue another item on the bucket list? Join a circus?

Fact is, my dream involved more than just publishing a book. It took that first book to realize that what I dreamed for and longed for was a career. I don’t just want to write one book. I want to write a hundred books. I want to have so many they fill a bookcase. In a bookstore. With my name in lights hanging over it like I’m in Vegas. Hey, you gotta dream big, right?

That’s the dream I tell people, if they ask. The step I take to get there, so far, is to write the next book. Always. Keep writing, keep moving forward, keep producing. Because I have a lot of stories to tell and like those guys hanging on that fence, I fear I missed the boat. I didn’t even try for this dream until I’d exhausted myself on the treadmill in cubicle land. Why’d it take me so long to figure out I could try for something better? I ask myself that question every day.

The dream that I don’t tell people is a lot quieter and much harder to quantify. In my dreams, someone, somewhere has my story in her hands. She’s on the train heading home from work. She’s tired from her own treadmill race and all she really wants is to forget the hassles of the day, the irritation of her co-workers, the expectations of her boss and the fact that she didn’t spend all that money getting a college degree to end up…here. She wants to live in someone else’s world, if only for a little while. So she has my story in her hands, and she’s reading. My dream is that it takes her away. That it lets her live a fantasy. That it helps her ease out of work mode and into home mode where she can maybe focus on something that’s just for her. My dream is that when she reads the last word on the last page, she smiles and leans back and closes her eyes, pleased with the journey.

I’ll never see that dream realized. Because I don’t know her, and I’m not there as she reads and I’ll never see her face as she finishes the story. But it’s enough to know she’s out there, I think. And who knows, maybe she’ll leave a review to tell me about it.

So when I see someone reading in the coffee shop or on the bus or whatever, it always makes me smile. Somewhere, an author is hanging on the fence, watching the game, with stars and hope in their eyes.